Undergraduates in the Archives – Gotkin 3

3What has been your best experience or greatest success?

¶ 1 Leave a comment on paragraph 1 0 In one of my undergraduate courses a professor handed out a checklist for good archival research. The last item on the list was simply, “Get lucky.” My most meaningful archival work has indeed come out of the pleasures of spelunking in archives, hoping to come upon a hidden gem. In my junior year of college I studied abroad in Paris, where I took a class on global media structures. As many graduate-level courses require, the final paper was an individual research project rather than a paper based on class readings and discussions. I knew that my home department in New York offered a course called “Hacker Culture & Politics,” which I ended up taking as soon as I returned. In anticipation of that course, I contacted the professor, Biella Coleman, to ask if she had any contacts in Paris who were working on hacking. After a series of e-mail introductions through friends of friends, I got in touch with the head of a hacker space just outside of Paris.

¶ 2 Leave a comment on paragraph 2 0 Although I originally intended to study a contemporary aspect of hacking, I ended up with a historical project. After talking with a few French hackers on Internet Relay Chat, it became clear that the early French hacker scene was highly ritualized around electronic magazines, or e-zines. Ultimately, I wrote the paper based on research from about seventy different e-zines sent over digital bulletin board systems and the nascent Internet (see Figure 2). Getting access to the e-zines was not easy, and in the end, I amassed my own archive. Mine was not the image of the archive-as-dungeon, but instead the archive-as-disk-space. Perhaps as difficult to catalog and maintain as any rare book collection (if not more so), the e-zines I collected were infinitely reproducible and accessible from anywhere, even after I left France.

¶ 3 Leave a comment on paragraph 3 0 Archival practices change when the historical subject is itself born digital. The challenge of marshaling evidence around a research question is no less important, but the dematerialized archive demands new techniques of investigation. What happens, for example, when we can do archival research from a coffee shop? The absence of the physical walls in a traditional archive might become a new figurative challenge. What is archival work if the archivist is not literally surrounded by material? These are the questions that productively vex my research. Creating the digital archive has been my greatest success because it provided me with a set of substantive and methodological questions that continue to complicate and broaden my research years later. 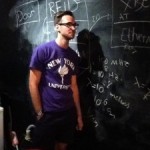