“Babylon must not videotape the sacred service”: Archives, Performance, and Cultural Memory

¶ 1 Leave a comment on paragraph 1 0 From June 23 to June 26, 2013, several hundred special collections professionals and their colleagues—librarians, archivists, media archaeologists, djs, and booksellers, among others—gathered in Minneapolis for the 54th annual Rare Books and Manuscripts Section (RBMS) Preconference, “O Rare! Performance in Special Collections.” An array of breakout sessions ranged from ravishing forays into the arcana of descriptive bibliography to persuasive pleas to engage with the brave new world of the semantic web. At its core were three plenaries that dared us to examine the heart of our own performance as a profession: what, why, and how we archive.

¶ 2 Leave a comment on paragraph 2 0 Larisa Mann, media commentator, Professor of Sociology at Brooklyn College, and dj, asked us to think hard about ethical issues that archivists who seek to document living cultures will inevitably engage: desecration, invasion of sacred spaces, silencing of the poor, unfair profit that mimics colonial relationships, commercialism, issues of class and race, and state violence. Even if one’s purpose is to preserve and rescue from oblivion the living practice of a “submerged” culture, what actually happens when the archivist deracinates and repurposes the performance? Those within the submerged culture may rightfully resist, Mann asserted, quoting from reggae musician Sizzla Kalonji’s “Burn Out Smithsonians”:  “Babylon must not videotape the sacred service.” Mann’s advice to archivists: Don’t stop at compliance with the law. Copyright means nothing in exilic space. Don’t rely on boundaries that you recognize of commercial/noncommercial or secular/sacred to guide your actions. To understand, you must ask, what are the functions and values of the performance for the community?

¶ 3 Leave a comment on paragraph 3 0 Continuing plenary one, Katherine Reagan and Ben Ortiz from Cornell’s Rare and Manuscript Division described their experiences with its Hip Hop Collection. The archive features “hundreds of party and event flyers ca. 1977-1985; thousands of early vinyl recordings, cassettes and CDs; film and video; record label press packets and publicity; black books, photographs, magazines, books, clothing, and more.” Donated to Cornell in 2007 by Johan Kugelberg, the collection was well received in the academy. Researchers arrived and classroom use was frequent. Yet the hip hop community was not engaged. Not surprisingly, the library catalog did not reach out to that community, so for its members the materials had “disappeared” into the library. Enlisted to strengthen outreach, Ortiz invited the hip hop community into the vault. Hip hop artists came in to teach courses, bringing the voices of the creators back into the ongoing conversation that the archive constitutes. With the active participation of the community, the collection continues to grow.

¶ 4 Leave a comment on paragraph 4 0 In the second plenary, media archaeologist Elizabeth Haven Hawley spoke on “Revaluing Mimeographs and Other Obsolete Things: An Introduction to Media Archaeology.” This critical practice excavates media-cultural evidence for clues about neglected, misrepresented, and/or suppressed aspects of each medium’s past(s) and tries to bring them into conversation with present perceptions of the medium. A major concern of the practice is recovering evidence of the past on its own terms. Sometimes (usually?) multiple contexts for objects exist at once (like Schrödinger’s cat). During the Q&A, a participant posed the question, does the professionalizing of alternative press technology constitute selling out, losing the exilic space, losing authenticity? Answer: Certainly it might; commercial productions use low tech as a trope for authenticity. In a similar vein, someone else asked, does who manufactured it and the circumstances of its manufacture have a connection with the content/meaning? Answer: Groups want to produce their own messages, and improving their technology does not necessarily mean changing their message.

¶ 5 Leave a comment on paragraph 5 0 In the final plenary, Douglas Reside, Digital Curator for the Performing Arts at New York Public Library, provided some examples of digital archaeology. Using a Basilisk emulator, he investigated the contents of Jonathan Larson’s back-up #41 for the text of “Rent.” In 1992, saving a document was a time-intensive process due to low computing power. With Word 5.1, released that year, Microsoft figured out how to save only the changes, not the entire text each time. Just one file on back-up #41 has fourteen different versions of “Rent”—palimpsests—in it. And there are thirty different versions saved as different files on the back-up—a rich record of the creative process. Reside went on to point out that we have physical objects for the 1980s and ‘90s (disks of various sizes/kinds, hard drives, etc.), but artists working today are producing work in the cloud on servers they will never see or control. What will the curatorial archaeologists of tomorrow have to work with? Those in the future may well see our present time as the Dark Ages of the digital era, when much was lost. Maybe libraries will become the place where the equipment will be stored and people will design software emulators to retrieve and access digital incunabula. While acknowledging that no library or libraries can save everything, Reside urged us to commit to retrieving and saving what we can.

¶ 6 Leave a comment on paragraph 6 0 Marvin J. Taylor, Director, Fales Library and Special Collections, New York University, wrapped up with cogent commentary on the themes of the preconference: exilic spaces, communities and cultural understanding, diversity, performance and performativity, embodiment, control of narratives, how the colonialism of collecting still haunts us and it should, programming, embodiment, and the archive of affect. As we rethink the narrative of “western” civilization, we also need to examine our continuing problem with the very foundations of collecting and how we do it. He cautioned us to consider what happens when we talk/think about our audience or the subjects of our collecting as “them.” Perhaps “they” need to be “us”? Does anyone remember the 1995 RBMS preconference on “Collecting Cultures: The Politics and Practice of Building Special Collections,” which brought scholars from gender studies, American studies, African-American studies, Asian studies, Pacific-American studies, and labor studies? Did it matter? Yes, we are different now; “Collecting Cultures” had long legs.

¶ 7 Leave a comment on paragraph 7 0 Hitherto, Taylor noted, the archivist’s profession has existed at the nexus where performance became object. He advocated that we move away from a Derridean focus on text (object) toward Foucault’s notion of the archive as everything we do. Acknowledging the challenge of Ann Cvetkovich’s Archive of Feelings, he challenged us to ask, Can we create archives of feeling, reaching into the realm of performance? Concluding, Taylor noted that media is strewn with the recent victims of cultural oblivion and technological obsolescence. It is going to take more than manila folders and telecine machines to archive our cultural moment, if we want to preserve more than the dismembered skeletons of textual remains. We must act now to keep from losing the “incunable” period of born-digital and electronic media in which the archives of feeling might be preserved.

¶ 8 Leave a comment on paragraph 8 0 In sum, the preconference was provocative, entertaining, and varied. At the end, the cast and crew—the Program Planning, Local Arrangements, and Seminars committees—took a bow, bringing to a close a fine performance. 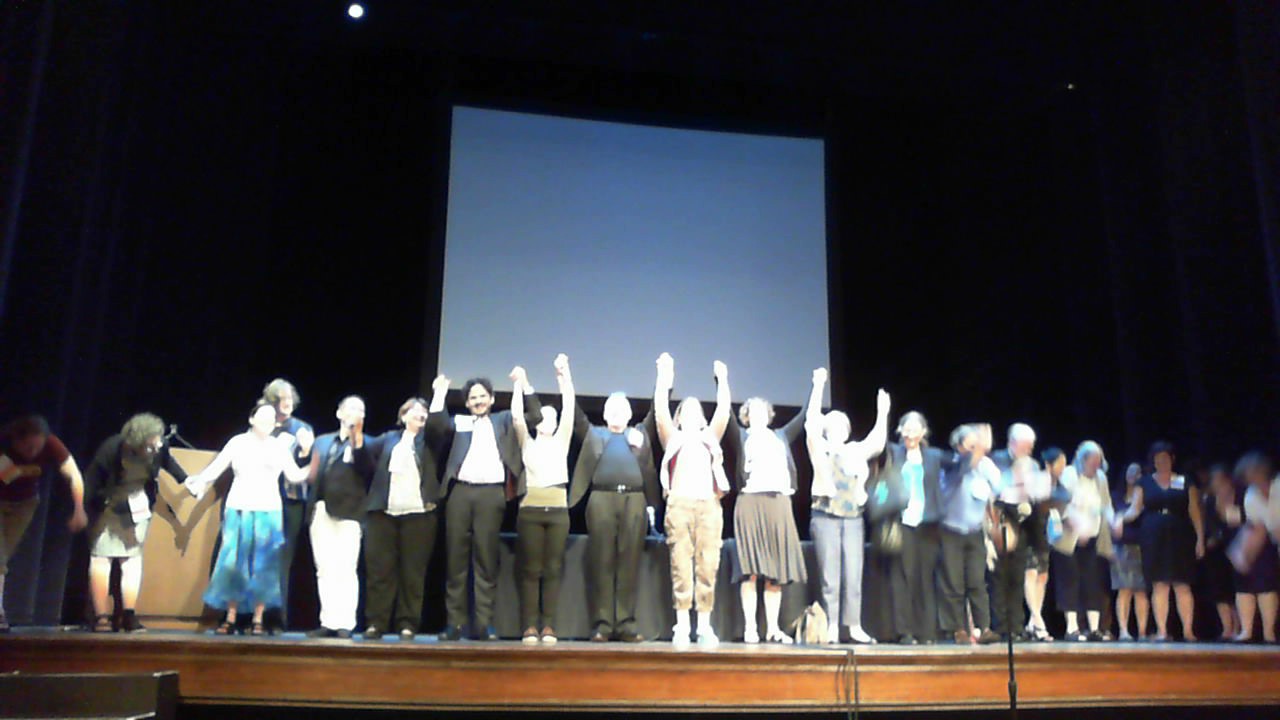